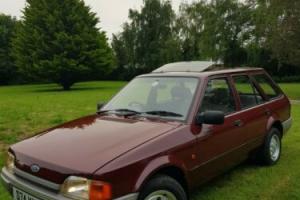 I purchased this car 04/05/06 from a chap in Ashford Kent he was a relative of the original owner who purchased it new on his retirement from plumbing. When I purchased it the mileage was 21721 miles. I am the third owner. According to the paperwork and history I was given, the car suffered a broken cam belt on 04/06/04 and subsequently two bent valves. I have a receipt for the repair from the original owner's local garage for nearly £540.00.

Ford Escort  Mk4 1600L 5 door Estate in solid Lacquered Red, interior colour Taupe. The 1600 CVH engine is mated to a 5 speed gearbox. The engine is responsive and the gear change up and down is smooth as is the clutch. The car is fitted with an after market Skygazer, removable, dual position tilt sun roof (I have the original guarantee certificate). Unfortunately I was never given the bag for when the sunroof is removed. There are no leaks to the sunroof. The car has 3 Chubb Ava type keys, 2 original Ford and 1 copy. One key operates all locks including the fuel cap. The car is not fitted with central locking nor does it have power steering. Windows are operated manually as are the adjustable mirrors. Features are refreshingly sparse so less to go wrong. 3 speed wipers including intermittent with rear tailgate wiper and washer. Interior courtesy light which operates when either front doors are open. The car is fitted with it's original Ford radio cassette, AM MW only, when turned on the radio does light up and works but there is no FM receiver. The cassette player is in working order. Unfortunately the aerial is broken under the front o/s wing but I have a new genuine Ford telescopic replacement which will come with the car.Genuine Ford contoured floor mats and genuine Ford front mud guards. The car is also fitted with its original Carello headlamps and has H4 type lamps fitted. This car is normally fitted with the original steel wheels and the correct wheel trims shown in the photos. It is currently fitted with 5 Arrowspeed T100 155-80 R13 79T tyres. 2 of the tyres on the rear are nearly at the end of their life so 2 nearly new Continental Conti Eco Contact 3 155-80 R13 79T plus 2 Unroyal 155 80 R13 will be supplied. In 2007 I had a set of 5 genuine Ford Fiesta XR2 pepperpot alloy wheels 6J 13's refurbished at Lepson's of Medway Kent. These were occasionally fitted to the car in summer, mainly for car shows. They come with the correct genuine Ford chrome wheel nuts plus a set of genuine Ford locking wheel nuts and key code. The alloy wheels are as good as the day I had them refurbished and are unmarked in every way and come with the correct centre caps. They are fitted with Michelin Energy 175-70 R13 82T tyres. The spare wheel and tyre have never been on the road.

The car was originally made in Germany and was built to a high standard. The german made Fords, particularly of this age, seem to have fared better as regards to corrosion. As a result this car has never had any welding done and nor does it need any. The car has recently had a full professional valet which has shown up some car park damage on the o/s/r quarter panel also there are 2 small dents on the o/s/r door. I am hoping to get some of this work done, albeit minor, but it depends if my trusted body shop can give me a booking slot.This work has now been done and was finished on 15-07-21 and  has been done to a very high standard by Langstaff Classics of Deal.Those of you with knowledge of these cars will note that the front bumper is the incorrect type, this is because in 2009 the front bumper was replaced after another car reversed into me badly cracking the original bumper. Unfortunately I was unable to buy the correct new one from Fords. Both front and rear bumpers were repainted to match. I hasten to add that this was the only damage and no damage was caused to the front panel or lights or chassis. I still have the original broken bumper. The small crack in the rear bumper has been there since I've had the car, they are extremely rare so I've never tried to replace it. The interior of the car is in exceptional condition with the exception of the driver's door card. The card carcass itself has been repaired to a high standard as it was holed on the arm rest but the vinyl covering is a lot trickier as the heat that builds up during summer causes the vinyl glue to soften and peel.

Since owning this car in 2006 it has only been used sparingly and has always been garaged in the worst winter months. From 2011 to 2017 the car was laid up and garaged which is evident from the DVLA MOT history. I have all the original MOT certificates going back to 2004. Obviously over the years it has had oil, oil filter and air filter changes and spark plug changes and I have written evidence of this going back to 2008/9. I am sure I would of have had the valve stem oil seals changed at some time, but I don't have the evidence. The first cam belt change in my ownership was on 30/07/2010 at 30550 miles. On 17/01/2017 at 31601 miles a full set of genuine Ford wiper blades were fitted and are still in use. On 03/03/2017 at 31975 miles a right hand track control arm was fitted, at the same time the underside was wax oiled and mixed with 20W-50 oil, approx 3 litres was used so it was done well. On 24/02/2019 a complete clutch kit assembly was fitted due to the clutch being partially seized on on the clutch release mechanism.  It had been noted that prior to this the clutch had been slipping. When the gear box was removed and the clutch fitted the n/s drive shaft oil seal was found to be leaking. Two new drive shaft oil seals were sourced and fitted together with approx 2.5 to 3 litre of EP 85w 90 Hypoid gear oil GL-4 yellow metal safe. On 01/05/2019 the rear brake drums were removed, glaze removed, brakes  adjusted including hand brake.  Also another coat of wax oil was applied to the underside. On 25/05/2019 at 33997 miles a new starter motor was fitted. In June 2019 a replacement ignition coil was fitted along with a new distributor and cap. It turned out that the coil was breaking down intermittently causing a problem. In September 2020 the tracking was checked and adjusted with the steel wheels, that are normally fitted to the car, with 155 80 R13 tyres. The cam belt and water pump were replaced on the 02/07/21 at 41296 miles. Date and mileage will be given when done. Over the years I have built up a rapport with some qualified, skilled and trusted mechanics that are experienced at working on this type of classic car so all work has been carried out to high standard.

This Escort estate is in exceptional condition throughout apart from the minor defects mentioned and which hopefully will be addressed. The car will be sold with the steel wheels fitted and the set of 5 Fiesta XR2 alloy wheels included. There can be no exception to this, the alloys come with the car. If you don't want them you can always sell them. The last picture shows a tow bar, fittings, wiring and instructions. It was purchased new by me for another mk4 estate I once owned and was removed prior to selling. Once again it is in exceptional condition. If you don't want the tow bar I will deduct £50 from the sale. I also have a set of genuine Ford rear seat belts, with fitting instruction, as rear seat belts in vehicles of this age were not a legal requirement but an optional extra. These are included in the sale.  The asking price for the car is £5150. Cash preferred but bank transfers accepted but the vehicle won't be released until transfer is complete. I am not interested in part exchanges or swaps. I am not prepared to travel to meet you part way but I will collect you from my local railway station if necessary. You are more than welcome to view and test drive the car if you are insured to do so. If you do not have the means to buy at the moment or cleared funds lets not waste each others time! However, I am happy to answer questions from serious prospective buyers, with the exception of 'what's the lowest I will take for it mate!'

No Warrenty given or implied.